skip to main | skip to sidebar

Summer Break -- What of a Dovecote?

Summer has flown in, fast and hot and almost unnoticed, like the Mourning Dove who makes her nest under our nose, quiet except for her cooing. Given the 4th of July is just behind us, I thought of taking a little "independence" from the standard fare.
Somehow this Italian, 18th-century limestone Dovecote from Roarke Antiques in East Hampton caught my eye, if not simply for the deliberate intent of the carving to house such a simple yet symbolic bird. As a universal symbol of peace, she's a statement of transformative grace, and seemed to be ever-present during my latest flight from town. 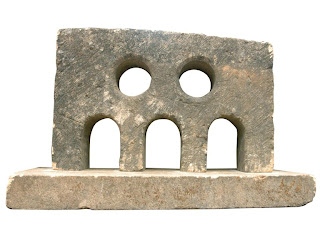 Imagine this dovecote in a beautiful open room, perched on a French side table, beside it, a book opened to a passage by Eudora Welty, offering a literary juxtaposition of the hard and soft:

"It was July when Jenny left The Landing. The grass was tall and gently ticking between the tracks of the road. The stupor of the air, the quiet river that now went behind a veil, the sheen of heat and the gray sheen of summering trees, and the silence of the day and night seemed all to touch, to bathe and administer to The Landing. The little town took a languor and a kind of beauty from the treatment of time and place. It stretched and swooned...
Pears lying on the ground warmed and soured, bees gathered at the figs, birds put their little holes of possession in each single fruit in the world that they could fly to. The scent of lilies rolled sweetly from their heavy cornucopias and trickled down by shady paths to fill the golden air of the valley. The mourning dove called its three notes, kept its short silence--which was its mourning?--and called three more." -- Eudora Welty, The Landing
Posted by Aimee at 10:03 PM

Aimee
I'm a lover of the old, the arts and the serendipitous. Here is where I explore found objects, lost art, hidden discoveries in music and literature, amazing design in biology and architecture, and overall beautiful and inspiring things. Cherchez la fantastique!